Transient Atmospheric Pressure Plasmas: from Plasmas to Liquids to Solids

In non-equilibrium plasmas, the temperatures of different types of plasma particles, such as electrons, ions, and neutrals, differ significantly. Non-equilibrium processes are the basis of many phenomena in nature such as transport, turbulence, excitation of atoms and molecules and their de-excitation on surfaces. When such plasmas are brought into contact with solids or liquids, the non-equilibrium character can also be transferred. The researchers of the SFB 1316 are concentrating on plasma catalysis and plasma-enhanced electrolysis. Molecules such as hydrocarbons or CO2 are converted at the interface between solid and gas or between solid and liquid.

Questions that concern the researchers are, for example: How does particle and energy transport take place on the nanosecond scale? How do these plasmas interact with the environment? What role do catalytic surfaces play in plasma chemistry? Can catalytically active surfaces be regenerated directly in the process? 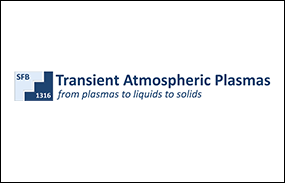